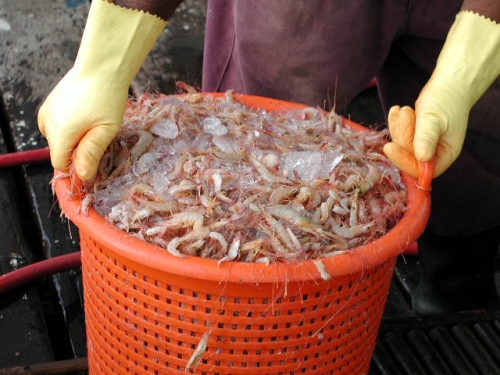 The Ministry of Agriculture, Fisheries Department, has implemented a closed season for the Guyana`s seabob (shrimp) fishery.

This 2014 closure was ratified by Agriculture Minister Dr. Leslie Ramsammy in keeping with protocols previously established between the Seabob Industry and the Ministry. The timeframe approved is September 8th, 2014 to October 26th, 2014 (6 weeks), both dates inclusive.

The closed session is supported by the Guyana Association of Trawler Owners & Seafood Processors (GATOSP).

In this regard, all Seabob fishing vessels were advised to dock from midnight on September 7th and will remain in port until midnight October 26th, 2014. Closed seasons are specified time periods where no fishing is permitted for a particular fishery and has been an ongoing activity for several years in Guyana; its implantation is closely monitored by the Fisheries Department on an annual basis. Such an intervention is not only limited to Guyana but has fast became a global practice aimed at allowing various fisheries to multiply or replenish, thus ensuring growth and sustainability.

The Seabob fishery in Guyana has been well known over the years for generating foreign exchange earnings and revenue through exports regionally and to markets in North America and Europe. The major industrial stakeholders include: Pritipaul Singh Investment, Noble House Seafoods, BEV Processors, Guyana Quality Seafoods and Fisheries Department.

Seabob data submitted by these companies are used to conduct annual stock assessments at the Caribbean Regional Fisheries Mechanism (CRFM), Annual Scientific Workshop. As much as seventeen member states participates annually at these meetings of which Guyana has been one of the more frequent attendees. It is important to note that attendance at these meeting support frequent stock assessments of an identified fish stock and it is a pivotal prerequisite to the country achieving Marine Steward Counsel Certification (MSC) for a particular fish stock.

Measures are currently being put in place for the seabob fishery to be assessed to achieve this certification shortly. MSC certification basically signifies that harvesting and management of a particular fisheries resource is being done in a sustainable manner which in turn allows for access into global markets for sale of produce.

The seabob stock was last assessed in June, 2013, where it was deemed fully utilised but not over fished. As a result of this, a proposed Harvest Control Rule (HCR) (considered as `best practices` in fisheries management) was drafted following deliberations with the consultant, GATOSP and Fisheries Department. Considerations were given to fisher earnings, political acceptability and the level of precaution required. It was noted that any proposed HCR would undergo further evaluation through future stock assessments, which it was hoped would include improvements on the 2013 assessment. However, it is not anticipated that this would dramatically change any results. An overall days-at-sea limit was proposed; 87 licences each with an allocated 225 days at sea.

The proposed rule was evaluated in June, 2014 by members of the Continental Shelf Fisheries Working Group (CSWG) which comprises representatives from Guyana, Suriname and Trinidad and Tobago. The group endorsed the rule on the basis that was considered to be consistent with attaining maximum sustainable yield (MSY) and maintaining the stock above the limit reference point. This limit was acceptable to industry, because it would not limit current fishing activity as long as indicators remained high, and would allow the fishery to take advantage of strong recruitments. The stock is currently in a good condition which was indicated by the attainment of favourable catch rates by fishers. Despite these achievements the current fishing effort employed is lower than the maximum limit stipulated in the HCR which augers well for sustainability.

The Minister has also approved the closed of the prawn fishery for the same period.

More in this category: « Caribbean Fisheries Officers off to Australia for Training Common Fisheries Policy for Caribbean authorized for implementation, amid move to strengthen regional cooperation »
Login to post comments
back to top