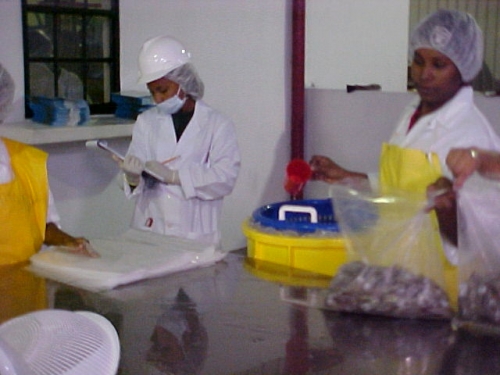 The Belize Agricultural Health Authority (BAHA) is one agency from CRFM Member States which helps to ensure SPS compliance for fisheries exports from Belize. BAHA

BRIDGETOWN, Barbados, 13 December 2016 (CRFM)—The fisheries industry on Wednesday moves one step closer to making the Caribbean fish and seafood trade safer and more profitable when experts meet in Barbados to finalise a raft of model regional laws, policies and procedures.

The Caribbean region’s ability to cash in on a potentially lucrative, international export trade in fish and seafood – already worth 315 million US dollars a year – is being held back by gaps in sanitary and phytosanitary (SPS) standards, the Caribbean Regional Fisheries Mechanism (CRFM) said.

But the experts, who are wrapping up an 18-month-long project to investigate fish handling policies and design a new seafood safety regime for the region’s fish and fishery products, are set to introduce a new regime for SPS measures in CARIFORUM states.

“The continued viability and further development of the fishing industry of the CRFM region face several challenges, some of which are related to inadequate development of SPS systems to suit the specific needs of fisheries and aquaculture operations,” said CRFM Executive Director Milton Haughton ahead of the two-day meeting.

Haughton said the experts are meeting to bring forward work begun a year ago on preparing model legislation.

The meeting will unveil model fisheries and aquaculture SPS legislation that is to be presented to CARICOM with the intention of being enacted in each exporting nation. The model legislation has been developed in consultation and communication with policymakers, fisherfolk, processors and other industry players.

Investigations by international consultants on the project exposed large gaps in legally binding protocols managing food safety throughout the region.

With the impact of global environmental changes including climate change on the Caribbean, the regional fisheries agency said there is need for improved management and monitoring of the natural environment that sustains fisheries and aquaculture production.

The meeting is to be streamed live daily for regional media, industry figures, officials and anyone interested in fisheries and the safety and health of fish and seafood in the region, the CRFM said. The proceedings may be followed on the CRFM’s YouTube channel, youtube.com/TheCRFM.

Government officials from each CRFM member state are to review and endorse the final documents to allow final approval. These will then be recommended to CARICOM’s Council for Trade Economic Development (COTED), the regional bloc’s forum of trade ministers, as well as other CARICOM bodies.

The two-day meeting is the high point of a European Union-funded project to help CARIFORUM countries introduce laws, regulations and a governance system to guarantee safe seafood for export to EU markets and beyond.

More in this category: « First Marine Climate Change Report Card for the Caribbean in the works Caribbean Regional Fisheries Mechanism hosts training in fishery sector sanitary controls in St. Vincent and the Grenadines »
Login to post comments
back to top