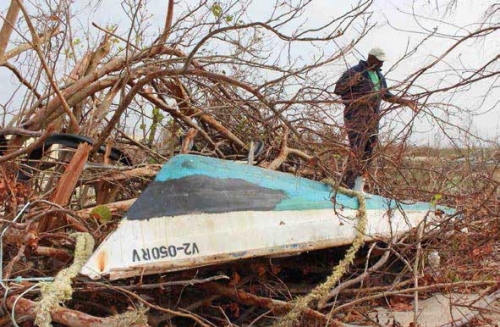 Belize City, Friday, 20 October 2017 (CRFM)—Several Caribbean countries have been recently devastated by two catastrophic hurricanes, Irma and Maria, underscoring the need for Member States of the Caribbean Regional Fisheries Mechanism (CRFM) to press forward with risk insurance for the fisheries sector—being developed by the Caribbean Catastrophe Risk Insurance Facility Segregated Portfolio Company (CCRIF SPC, formerly known as the CCRIF) in collaboration with the World Bank. This initiative to develop risk insurance for the fisheries sector in CARICOM States is supported by the United States government under the Caribbean Ocean and Aquaculture Sustainability Facility (COAST).

At the 7th Meeting of the CRFM Ministerial Council, hosted in Georgetown, Guyana, on 5th October 2017, policy-makers underscored the need for CARICOM Member States to move ahead with adopting risk insurance that would enable the fisheries sector and fishers to bounce back more quickly after a hurricane strikes. So far, there has been no payout provided specifically for the rehabilitation and recovery of the fisheries sector, although there have been other payouts under the broader umbrella of the CCRIF scheme. Since its establishment in 2007, the CCRIF SPC has made payouts of a little more than US$100 million to 12 of its 17 member countries – all within 14 days of the disaster event.

“Having such an insurance scheme is one of the good things we can do to help fishers get back on their feet as soon as possible after a disaster,” said CRFM Executive Director, Milton Haughton.

The development and implementation of the livelihood protection policy for individual small-scale operators and the sovereign parametric policy for States that the CCRIF SPC is working on, now assumes greater urgency for the sector, the CRFM Executive Director underscored.

Haughton expresses the hope that in light of the destruction and devastation which the recent hurricanes have caused in CRFM Member States such as Antigua and Barbuda, Dominica, Haiti, Montserrat, St. Kitts and Nevis, and Turks and Caicos, that all parties will redouble their efforts to get the risk insurance facilities for the sector established as soon as possible and certainly before the next hurricane season. He said that the insurance policies are being designed to provide quick relief to those fishers who experience distress as a result of disasters such as hurricanes.

A report published by the Fisheries Division of Antigua and Barbuda in September, titled ‘HURRICANE IRMA – PRELIMINARY DAMAGE ASSESSMENT FOR ANTIGUA AND BARBUDA’S FISHERIES SECTOR,” said: “In terms of the impact Hurricane Irma had on fishers and their families, considering the role the sector plays with respect to employment, food security and as a ‘safety-net’ for other economic activities (i.e., occupational pluralism), a total of 778 individuals were affected including 193 fishers and 585 financial dependents… This accounted for 25.5% of the population of Barbuda (1,800) (i.e., one in every four persons) and 0.3% of the population of Antigua (91,440).”

The report notes that there were 37 boats, over 2,000 fish traps, and 17 gill nets destroyed. An aquaponics facility at which fish and vegetables are farmed together suffered minor damage and damages were also reported to some fisheries facilities, such as wharves and public buildings.

The CRFM Secretariat is currently developing a model Disaster Management Plan for the Fisheries Sector of the region to facilitate adequate preparation by stakeholders before disaster events and to ensure speedy, coordinated assessment and recovery efforts after such events.