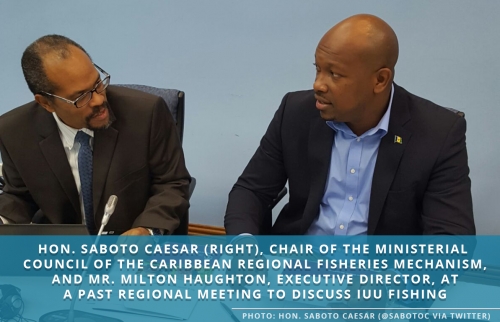 Belize City, Tuesday, 28 September 2021 (CRFM)— Caribbean Ministers responsible for Fisheries and Blue Economic Growth are scheduled to meet in conference on Monday, 4 October 2021, with representatives from the Government of Norway, the CARICOM Secretariat, and other regional and international development partners. The purpose of the conference, which will be convened virtually by the Caribbean Regional Fisheries Mechanism (CRFM) is to take decisive action to strengthen regional and international cooperation at the political level to combat and eradicate the scourge of illegal, unreported, and unregulated fishing and transnational organized crime in the fisheries sector.

Some Ministers will deliver brief statements on the issues and then sign the International Declaration on Transnational Organized Crime in the Global Fishing Industry, which has already been adopted by 36 other countries. The Caribbean Ministers will set the stage for future action across the region, in collaboration with the Blue Justice Initiative, launched by the Norwegian Government in 2019, in support of the Copenhagen Declaration. The Copenhagen Declaration and the Blue Justice Initiative provide a non-binding international framework for cooperation among States to prevent, combat and eradicate transnational organized crime in the global fishing industry.

Hon. Saboto S. Caesar, Chair of the CRFM Ministerial Council, and Minister of Agriculture, Forestry, Fisheries, Rural Transformation, Industry and Labor, Saint Vincent and the Grenadines, will preside over the Ministerial meeting. Minister Caesar said: “Illegal, Unreported and Unregulated Fishing is a major threat to the fisheries resources of the Caribbean Region. It undermines regional and national efforts to sustainably use, manage and protect fish stocks, leading to the loss of both short and long-term social and economic opportunities—including food security, livelihoods, exports and the realization of sustainable and inclusive blue economic growth in the region.”

Mr. Milton Haughton, the Executive Director of the Caribbean Regional Fisheries Mechanism said: “The growing connection between illegal, unreported and unregulated (or IUU) fishing and transnational organized criminal activities—such as drug trafficking, human trafficking, arms trafficking, trade in contraband goods, tax crimes, and money laundering, which use fishing as a cover—is an area of increasing concern.”

On 10 December 2020, several Ministers responsible for Fisheries from the CARICOM / CRFM Member States participated in a virtual High-Level International Blue Justice Conference that was convened by the Government of Norway. Subsequently, in May 2021, the 15th Meeting of the Ministerial Council of the CRFM, issued Resolution No. MC 15(6) of 2021 expressing support for the Copenhagen Declaration on Transnational Organized Crime in the Global Fishing Industry and the Blue Justice Initiative. The Ministerial Council outlined the next steps, which include the upcoming high-level, virtual ministerial conference.

Following this Ministerial meeting, the CRFM plans to convene, in collaboration with UNDP, a regional technical meeting with fisheries and security officials from Member States, to map out specific needs and to agree on at least one high-priority intervention that will benefit all CRFM Member States and that could be supported under the Blue Justice Initiative.

Further information on the Ministerial Meeting is available on the CRFM’s website here. Download a PDF copy of this press release here.

The Ministerial Meeting on the Illegal, Unreported and Unregulated Fishing and Transnational Organized Crime is one of a series of Ministerial meetings which will be held during the 16th celebration of Caribbean Week of Agriculture, which will be observed virtually for the first time during the week of 4-8 October 2021, under the theme: “Transforming our Food Systems”. The CRFM will also convene the 11th Special Meeting of the Ministerial Council on Monday afternoon.

Later in the week, the CRFM will participate in several webinars being hosted during Caribbean Week of Agriculture, which takes place under the aegis of the Alliance for Sustainable Development of Agriculture and the Rural Milieu, of which the Caribbean Community (CARICOM) Secretariat is a member.