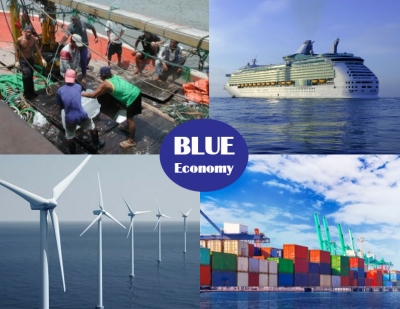 BELIZE CITY, 4 MARCH 2020 (CRFM)—A new US$46 million initiative to promote Blue Economic priorities in the Caribbean, in support of the sustainable use and conservation of the region’s vast and diverse marine ecosystems and resources, gets underway with a two-day inception workshop on 5-6 March at the Best Western Plus Belize Biltmore Plaza Hotel in Belize City.

Marine ecosystems account for over 80 percent of CARICOM States and territories, supporting not just fisheries, but also tourism, ocean transportation, energy, and other economic pillars. They are also critical to the sustainable livelihoods of coastal communities and food security for markets even beyond their borders. Despite threats that confront the region—not the least of which are climate change, ocean acidification, marine pollution and irresponsible fishing—the Blue Economy model still holds great promise.

The current initiative, entitled “Blue Economy (BE): Caribbean Large Marine Ecosystem Plus (CLME+): Promoting National Blue Economy Priorities through Marine Spatial Planning in the Caribbean Large Marine Ecosystem Plus,” is a 4-year project funded by the Global Environment Facility (GEF) with a grant of US$6.2 million and co-financing of US$40.1 million. The Development Bank of Latin America (CAF) will be the lead implementing agency while FAO will be a co-implementing agency. The Caribbean Regional Fisheries Mechanism (CRFM) will be the project executing agency. The GEF-funded “BE-CLME+ Project” will promote blue economy development in the Caribbean region through marine spatial planning and marine protected areas, the ecosystem approach to fisheries, and development of sustainable fisheries value chains.

The expected results of the project include focused climate-smart investments into national and regional marine spatial planning (MSP) efforts that inform development and implementation of national blue economy strategies. The multi-country project will also focus on extending or strengthening marine protected areas to preserve marine ecosystems and ensure sustainable livelihoods to coastal and fishery communities. The project is also expected to result in the establishment of a regional MSP for ecosystem-based fisheries, inclusive sustainable fisheries value chains, and new or expanded marine protected areas in at least five Caribbean countries. It will also support improvements in knowledge management, monitoring and evaluation, based upon knowledge and experiences from the project and experiences with climate-resilient blue economies from other regions and other Global Environment Facility (GEF) International Waters projects, in partnership with IW: LEARN (the GEF’s International Waters Learning Exchange and Resource Network).

The Inception Workshop, to be held on 5-6 March, will be attended by representatives of the six participating countries: Barbados, Belize, Guyana, Jamaica, Panama and Saint Lucia, as well as partner agencies, including the Food and Agriculture Organization of the United Nations and the Development Bank of Latin America, SICA/OSPESCA, UWI-CERMES, JICA, UNDP-GEF CLME+ Project and the Caribbean Network of Fisherfolk Organisation (CNFO). Officials from the CRFM, CAF, FAO/WECAFC and the Belize Ministry of Fisheries, Forestry, the Environment and Sustainable Development will address participants at the opening ceremony, to be convened at 9:00 a.m. on 5 March.

It is expected that at the conclusion of the workshop, the participating States and partners will have agreed on the main activities, milestones and timeline to develop the detailed project document and workplan for submission to the GEF for consideration by November 2020. 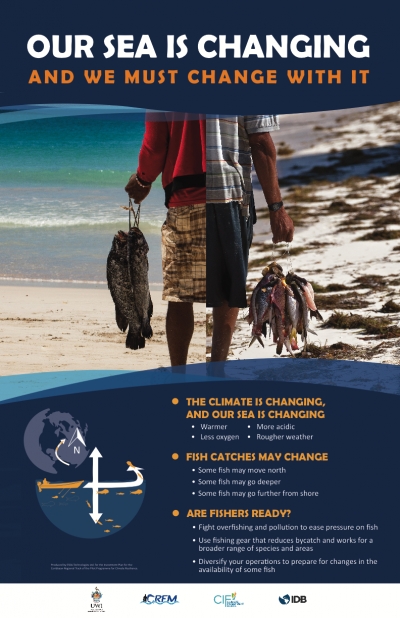 Several information and knowledge products have been generated by the CRFM coordinated marine sub-component of the IDB-funded Pilot Program for Climate Resilience - Caribbean Regional Track that is being generally managed by the Mona Office of Research and Innovation (UWI, Mona).

These products give key messages to fishers, fisheries managers, vendors and consumers on the impacts of climate change on life below water, and ways to adapt.

And check out CRFM's latest Research Paper Collection Volume 9 that gives the most up to date details of the technical studies revealing expected climate change impacts on the marine capture fisheries sector.

BELIZE CITY, BELIZE, Thursday, 26 April 2018 (CRFM)—At its recent annual meeting in Montserrat, the Caribbean Fisheries Forum framed a set of recommendations that will be submitted to regional policy-makers at the 12th Meeting of the Ministerial Council of the Caribbean Regional Fisheries Mechanism (CRFM), slated for 18 May 2018 in Montserrat.

The Forum’s recommendations include measures for boosting production in the fisheries and aquaculture sector, risk insurance for fisheries, ongoing challenges to fisheries subsidies, gender mainstreaming, and the development of critical fishery management plans.

The Forum noted that the overall trend in total marine fish production of the CRFM Member States since 2005 is one of increasing production, with continued improvements over the 2015-2016 period. However, the region is a net importer of fisheries products. Latest data indicate that imports for the year 2016 totaled US$281.5 million, while exports were valued at US$256.2 million. Concerns were expressed that there are still gaps in the data and the Forum stressed the need for Member States to continue improving upon the collection and sharing of fisheries data, including trade data, in order to foster greater understanding and to strengthen management and development of the regions fisheries and aquaculture resources.

The Forum Meeting discussed a series of fisheries management plans, such as plans for the Blackfin Tuna and the Caribbean Billfish, as well as management plans for the use of Fish Aggregating Devices (FADs). These regional plans are aimed at improving cooperation among countries to ensure effective conservation, management and sustainable use of the fisheries and to protect the marine ecosystems.

Another important regional development relates to the introduction of co-management arrangements for specific fisheries, including FADs and fish pot fisheries in the Eastern Caribbean States that participated in the Japanese-funded Caribbean Fisheries Co-management (CARIFICO) Project. The Forum reviewed the outcome of the project and future steps for continued improvements on co-management and participatory approaches to achieve sustainable and profitable fisheries in the region.

The importance of climate change adaptation and disaster risk management plans to reduce vulnerability and improve resilience in the fisheries sector was prominent on the agenda. Among the key initiatives currently underway are the establishment of an early warning system for fishers using a mobile app, and the development of insurance policies. There are two separate insurance products being developed: one is a sovereign parametric policy which would be available for purchase by governments and the other is a basic livelihood protection policy for purchase by individual small-scale fishers.

The USA-sponsored Caribbean Oceans and Aquaculture Sustainability Facility (COAST) is being developed by the Caribbean Catastrophic Risk Insurance Facility Segregated Portfolio Company (CCRIF SPC) in collaboration with the World Bank, CRFM and other partners. The COAST insurance policy is intended to serve as a platform for innovative financing to address food and livelihood security and climate change. Incentives would be given through the risk insurance policy to implement measures that contribute to sustainable and climate resilient fisheries management and disaster risk reduction.

The need for livelihood protection was underscored by the devastation wrought by Hurricanes Irma and Maria in the Caribbean during the 2017 hurricane season. The Forum expressed its full support for the development of a protocol to incorporate climate change adaptation and disaster risk management into the Caribbean Community Common Fisheries Policy.

The recommendations were developed in order to protect the region’s fisheries resources from the threat of overexploitation and emerging threats such as climate change and warming oceans. They also aim to enhance the livelihoods, social welfare and wealth creation from the marine resources. According to CRFM’s Executive Director, Milton Haughton, the time has arrived for the CARICOM countries to pay more careful attention and make the investments necessary to protect and fully utilize our coastal and ocean resources for sustainable development.

The 16th meeting of the Forum was the first meeting of the CRFM held in Montserrat, one of the 17 Member States of the CRFM, due to the destruction of the capital city, Plymouth, by the Soufrière Hills volcano which began erupting in the mid 1990s.