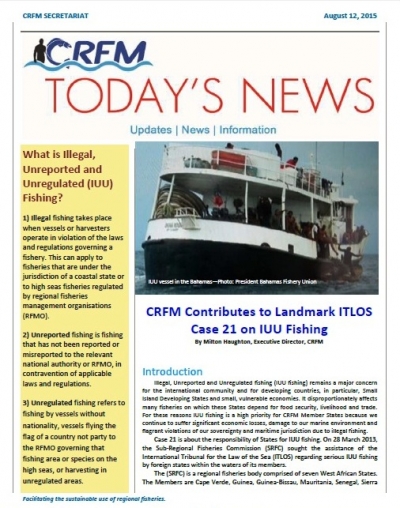 How to Handle Safe Seafood Standards 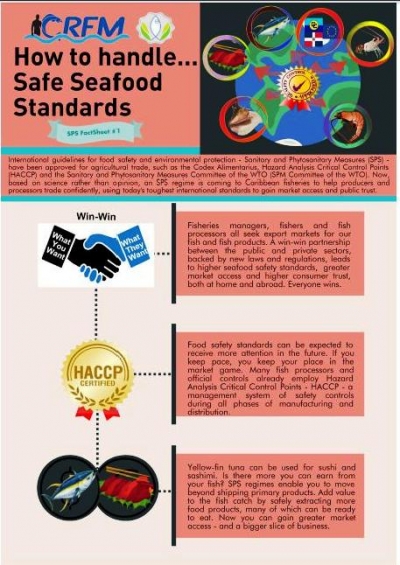 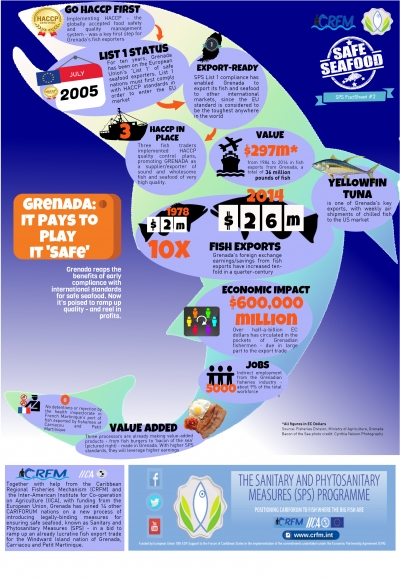 BRIDGETOWN, Barbados, Jul 30, (CRFM) – The Caribbean region's ability to cash in on a potentially lucrative, international export trade in fish and seafood is being held back by huge gaps in measures to protect food safety and animal health, experts say.

But the experts, who are investigating food handling policies in CARIFORUM countries, are set to propose a new regime for sanitary and phytosanitary – SPS – measures in CARIFORUM states.

Since starting their work in April, Jamaican SPS expert Dr. George Grant, international legal consultant Chris Hedley of the United Kingdom and experts from the renown Icelandic food safety agency, Matis Ltd., have discovered that in most instances compliance with globally established standards are voluntary – a worrisome development they say that stops member states from tapping into
niche markets overseas and boosting foreign exchange earnings.

There are also either no legally binding protocols managing food safety throughout the region or where they are practised they are disorganised and informal, say the experts.

"It's the prerogative of the government, or the official, competent authority to develop a system whereby the food safety measures can be validated, inspected and can be regulated," Dr Grant says.

In two months of national consultations on SPS measures sponsored by the European Union in a number of CARIFORUM nations, Dr. Grant said there are no documented and transparent protocols for ensuring safe food handling and monitoring food processes.

Several Caribbean nations are yet to include these standards in their national regulatory system, something that has long been mandatory in many of the developed nations to which regional fisheries and food industries might seek to export.

But the CRFM supported by a team of Seafood safety experts, veterinary expert and lawyer is developing a region-wide set of food safety and environmental safeguards which they hope to unveil for adoption in late August.

"The set of protocols we are developing is to have them formally presented and documented so that countries can use them as guides to developing their own particular protocols and practices," Dr. Grant says.

As they travelled through Caribbean Community (CARICOM) member states and the Dominican Republic which make up the CARIFORUM group of nations, the team assessed benchmarks for food safety in individual countries.

The news of the progress towards SPS compliance is encouraging. The experts note that most fish processors have implemented the Hazard Analysis and Critical Control Points (HACCP) standard for fish and fish product exports.

But as the Caribbean fishing industry and food makers seek to take advantage of the Economic Partnership Agreement (EPA) to gain access to markets in European Union, there is an extra layer of requirements based on official controls.

The EU is requiring that exporting nations put enforceable legislation in place in each country to govern the SPS standards.

Through an EU-funded project, implemented by the CRFM and Inter-American Institute for Cooperation in Agriculture (IICA), the team is hoping to establish a uniformed set of procedures across the industry.

"The question of where to draw the level in terms of how strictly you regulate food
safety is really very much a national policy decision," Hedley says.

He cautioned that the process can be complicated, costly and potentially counter- productive: "We don't want to over-regulate and sort of crack a nut with a sledgehammer, if there are not substantial food safety problems.

"The more you regulate food safety and the stricter and more you demand in terms of that side of regulation, the more expensive products become, the less people are able to meet those requirements and they may be forced out of the business."

The aim, the legal expert says, is to step up protection measures, level the playing field, manage the risks involved in food protection and facilitate trade across the Caribbean and internationally.

"There is no end point to that, it's not like there is a single target we're going to aim for and then that's it - we can rest on our laurels. New challenges [are] arising all the time. It is a continual process of improvement," Hedley adds.

Yet, compliance is critical to the effectiveness of the new standards.

"[The EU] want to make sure that the legislation is properly in place in the country, that these requirements are not just voluntary but with specific legal requirements to implement these food safety procedures and that there are penalties in terms of not complying with them. So the businesses that don't comply with them can be taken out of the licensing process."

SPS legislation will need to be backed up by a system of government checks, controls and monitoring systems, says the SPS legal expert.

As the two-man legal team sifted through the paperwork – or lack of it – among Caribbean fisheries processors and exporters, another team of environmental monitors has been travelling the region, inspecting processing plants, cold storage facilities, testing laboratories and aquaculture facilities.

But the experts are anxious that the drive towards SPS compliance is not seen solely as jumping necessary hoops in the export trade. Hedley suggests that even if the region becomes compliant there is still no guarantee there would be an appetite for their goods in the EU. For Grant, another, often overlooked beneficiary is the Caribbean consumer who can rely more safely on wholesome food from the sea.

Fisheries managers, officials, scientists are expected to meet in Barbados on August
24 and 25 to pore over technical documents the SPS experts will produce, and their recommendations.

Hedley describes it as tool kit or resource paper which can be taken forward.

"This is a technical assistance project providing technical documents; actually they have to be developed in the real world politics and law and national sovereignty and go through the proper processes at the national levels and at the regional levels."

St. George's Declaration on Conservation, Management and Sustainable use of the Caribbean Spiny Lobster (Panulirus Argus)

ST. GEORGE’S DECLARATION ON CONSERVATION, MANAGEMENT AND SUSTAINABLE USE OF THE CARIBBEAN SPINY LOBSTER (PANULIRUS ARGUS)

St. George’s, Grenada, 13 May 2015 (CRFM): Fisheries Ministers from Member States of the Caribbean Regional Fisheries Mechanism (CRFM) are expected to sign off on the Declaration on Spiny Lobster by way of a resolution, when they convene the 9th Meeting of the Ministerial Council of the CRFM on Friday, 15 May 2015 at Flamboyant Hotel in St. George's, Grenada.

The non-binding declaration establishes a roadmap for closer cooperation among the 17 CARICOM/CRFM States to ensure long-term conservation and sustainable use of the lobster resources. The Ministerial Council meeting is scheduled to open at 9:00 a.m. The feature address will be delivered by Honourable Roland Bhola, Ministry of Agriculture, Lands, Forestry, Fisheries and the Environment, Grenada, who will assume the chairmanship of the Council on the occasion of the meeting from Honourable Johnson Drigo, Minister of Agriculture and Fisheries, Dominica.

Milton Haughton, Executive Director of the CRFM Secretariat in Belize, said: “This is another important policy-level meeting of the CRFM Member States as they seek to strengthen cooperative arrangements, to realize the full development potential of the fisheries and aquaculture sector in the region.

“Our vision and long-term goal is to transform the region’s fisheries and aquaculture into sustainable systems, in order to optimize the sector’s contribution to food and nutritional security, improved livelihoods and wealth generation, through the application of science and technology, good governance, and inclusive, sustainable development strategies.”

When they meet this Friday, the Caribbean Fisheries Ministers will be reviewing the progress being made in the implementation of existing policy instruments and programs. In charting the way forward, they will also make decisions on the next steps in the transformation process.

High on their agenda will be the endorsement of the process now underway to develop the Plan of Action to facilitate the implementation of the Caribbean Community Common Fisheries Policy (CCCFP).

The Fisheries Ministers will also discuss an initiative recently announced by the Government of the United States during the Caribbean Energy Summit on climate risk insurance for the Caribbean fisheries sector. This is in line with efforts to achieve Climate Smart Food Security (CSFS) using a Risk Insurance Facility (RIF).

The Ministerial Council will finally receive a full report on the outcome and recommendations of the 13th Meeting of the Caribbean Fisheries Forum, held in St. George’s, Grenada at the end of March this year.

The Ministerial Council of the CRFM is the arm of the CRFM which has primary responsibility for determining the policies of the organisation, resource allocation, cooperative agreements, and related decision-making. 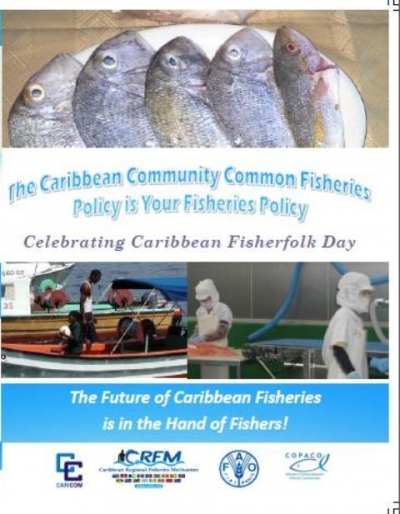 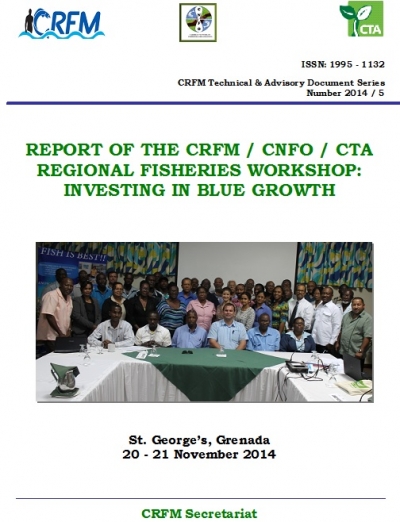 The Workshop which was organised by the Caribbean Regional Fisheries Mechanism (CRFM) Secretariat in collaboration with the Caribbean Network of Fisherfolk Organisation (CNFO) with support from the Technical Centre for Agricultural and Rural Cooperation ACP-EU (CTA), brought together stakeholders from the fisheries sector as well as the media to deepen their understanding of the “blue growth concept” on 20 – 21 November 2014, in St. Georges, Grenada.